The history of Denali National Park

Denali National Park consists of a huge mountain range in the middle of Alaska. The indigenous people of Alaska called the mountain massif in their respective dialect “The High” or “The Great”. And they are absolutely right about that. Today it’s called “The Mountain” everywhere. The first white man to see Denali in 1794 was George Vancouver, a seafarer. Denali was named “Tenada” by Baron Ferdinand P. Wrangell in 1839 when he was making a map of Alaska. Russia sold Alaska to the United States in 1867 for only $ 2.7 million. American taxpayers were unhappy with the purchase. They thought Alaska was worthless because it was covered over and over with ice. But even at the time of the gold rush, Alaska suddenly became interesting for the Americans. There were rumors of gold discoveries and tens of thousands of them were already making a pilgrimage to Alaska to try their luck there.

Two famous men have shaped the history and also the scientific work in today’s park. Charles Sheldon and Harry Karstens spent the summers of 1906 and 1907 in the area of ​​Denali National Park to observe wild animals and to document their behavior. Sheldon also used the winter of 1907 and 1908 for his scientific studies. One of today’s sights is their old log cabin. This stands on the Toklat River. Sheldon also had the original idea of ​​a Denali National Park. He wrote diary entries and very specifically described his idea of ​​a national park. Karstens directed the first ascent of Mount McKinley in 1913.

The fauna and flora in Denali National Park

In Denali National Park, both animals and plants were largely spared from extinction and human intervention. Most of the plant and animal species can be found in their natural environment.

The most famous inhabitant of the area of ​​Denali National Park is the grizzly bear, closely followed by moose, wolves and the wolverine. They share their habitat with lynxes, foxes, Dall sheep, mountain hares, marmots, ground squirrels, beavers and caribou. The caribou look like reindeer and are related to deer. Unfortunately, the caribou are very worried for the park operator. Because for reasons that are still unexplained, the number of animals has decreased dramatically. In 1940 there were still 25,000 animals. In 1975 there were only 1000!
For a few years, however, it has been observed that the population of these animals is slowly increasing again. Scientists compared the data with other caribou herds and found that other herds in Alaska and northwest Canada also experience similar fluctuations in the numbers of animals.

The colorful flora in Denali National Park is particularly beautiful. Due to the permafrost of the soil and the very short summers, these beautiful plants were able to thrive and create a great play of colors. Wildflowers, poplars, aspens and birches in the interplay with grasses, marsh mosses and herbs have their very own charm. 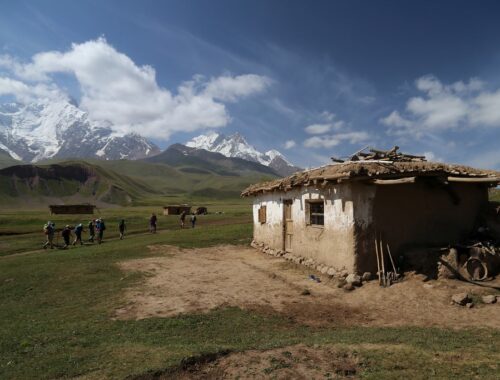