As an Arab country where Islam pervades every aspect of life and society, Yemen nevertheless preserves precious signs of the pre-Islamic era and of the other cultures of which, in some way, it has undergone the influence, from the Hellenic to the Chinese. According to Countryaah, Yemen is one of countries starting with letter Y. The geographical position at the crossroads between the Red Sea and the Indian Ocean has in fact favored, over the centuries, the landing and the more or less prolonged settlement of travelers, conquerors and merchants, although then the rigid Islamic imprint has hindered the economic and cultural opening towards the world for a long time. If in urban centers there are signs of modernity and industrialization, the lifestyle of a large part of the population remains rural, linked to traditional customs and practices. The past and history of the country still live above all in the architecture of the houses in the villages, in local handicraft products (fabrics, jewels, daggers), in traditional music, which boasts many exponents known throughout the Arab world, in works of ancient art preserved in museums. Today the figurative arts manage in some cases to free themselves from the Islamic precepts that bind them and numerous works of modern and contemporary art appear in the galleries. The National Art Center and the National Museum of Sanʽā are among the most active and important institutions in the country in promoting national works. The legacy of the past can also be found in the Ottoman or Asian architecture that are added to those of the more recent mosques. UNESCO has included three sites in the World Heritage Site: the old city of Shibām and the city walls (1982); the old town of Sanʽā (1986); the historic city of Zabīd (1993).

During the Mineo reignsand Sabaean Yemen experienced a great artistic flourishing whose testimonies, already scarce due to the destruction ordered by Muhammad, have not yet been fully studied. However, it is possible to recognize in the pre-Islamic monuments of South Arabian art a dense network of relationships with the rest of the ancient world, particularly with the Persian and late Babylonian ones; in a later phase, at the beginning of our era, there are also links with the Hellenistic civilization, particularly with Seleucid and Roman Syria. The buildings were generally built with the technique of layers of stones and wooden armor which allowed the construction of palaces up to twenty floors. The temples, of a square and very severe character, generally had a rectangular plan (Mineo temple of ‘Attar near Qarnāw, Sabaean temples of Sirwāh-Arhab and el-Huqqa), but there are also examples with a square (Gaybum), rectangular apsed (Sirwāh) or elliptical plan, such as the temple of Almaqah in Mārib; externally they were decorated with painted stucco or stone slabs carved with typically oriental motifs (palmettes, vine shoots, griffins). Of the sculptural production, noteworthy are the stone slabs with inscriptions completed by borders with animal and plant motifs; the steles with engraved figures in profile; statuettes of ancestors in limestone, alabaster or bronze in which it is possible to grasp the transition from more rigid and severe forms to greater expressiveness and softness determined by Hellenistic and Palmyrene influences. Almost nothing remains of the Christian churches built by the Abyssinians. Islamic art introduced completely new forms (mosque in Sanʽā, domed mosque-mausoleum in Dhāmar); the minarets in this area took on the form of back floors. 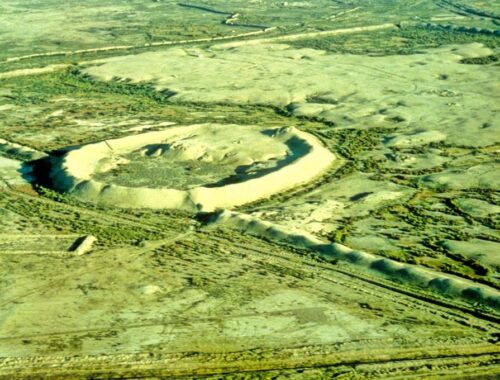