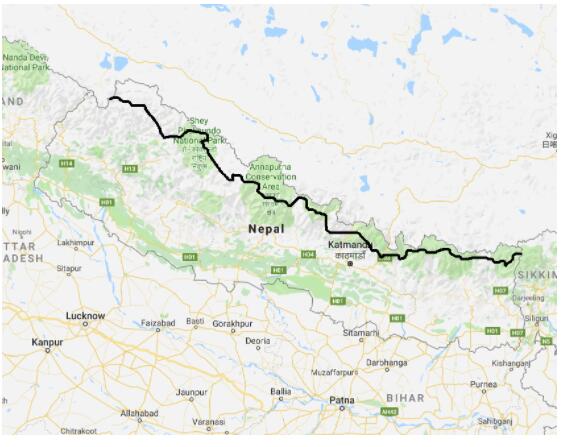 Nepal is without a doubt the world’s best trekking country, and here is a large, fine-meshed network of more or less trodden trekking trails, from the much-visited Annapurna and Everest regions to the most isolated and desolate parts of the country to the east and west. The many options let travelers to the country choose the geographical area of ​​the trek, length, altitude and degree of difficulty, so that it fits exactly to their wishes.

Common to all the major trekking routes in Nepal, however, is that if you truly can not or will not choose between them, then it is actually possible to escape – and trek them all, from the far eastern corner to the far west! The route, which intertwines all of Nepal’s major trekking routes, is also called the Great Himalayan Trail, and if you want to try your hand at it, you must prepare to spend around half a year on foot through the Himalayas.

Read more about the Great Himalayan Trail below.

The high Himalayas always have spellbound adventurers, and the 20th century saw the greatest mountaineers flock there hoping to be the first to set foot on top of the world’s highest peaks.

halfway through the century, the race to the top of the world’s highest mountain, Mount Everest, had been going on for decades. After a long series of failed, primarily British expeditions to Everest from the Tibet side of the mountain, Nepal opened the country’s borders to foreigners in 1950. That same year, a French expedition succeeded in reaching the top of the first 8,000s ever, Annapurna in central Nepal, and only three years later, in 1953, Nepalese Tenzing Norgay and New Zealand’s Edmund Hillary managed to reach the top of the world’s highest mountain. > It was a fantastic achievement, and the style was thus set for adventure trips to the mountainous country of Nepal.

When the 1960s came, the idea of ​​Nepal as the world’s best trekking country was hatched, and the little gem of the Himalayas began to attract travelers who dreamed of hiking along winding paths with the world’s highest white peaks as a backdrop; The classics Annapurna Rundt and the Everest Base Camp trek were born, and Nepal had established itself as the birthplace of adventure tourism. However, there were still only a few travelers who were willing to go all the way to the high Himalayas “just” to spend a few weeks hiking through the mountains, so it took a long time before one really started thinking about other and greater adventures than the two most well-established, must-do routes.

In the 1980s and 90s, a very special thought began to grow among the most enthusiastic adventure travelers to Nepal; the idea of ​​merging all of Nepal’s major trekking routes into one long trek that would stretch from the easternmost corner of the country to the far westernmost corner; a high alpine route that would surpass one another on the planet.

However, it took several more years before the wild dream became an equally wild reality. In 2009, the route, which was named “The Great Himalayan Trail”, was walked for the first time in its full length, and a few years later, in 2011, the route was completed for the first time by a commercial expedition. There has been talk of extending the route into Bhutan, Tibet, Pakistan and India so that it extends across the Himalayas. This would result in an approx. 4,500 kilometers long route, but so far only the 1,700 kilometers long Nepalese part has been established and it is not for travelers with soft knees.

According to petwithsupplies, the route is divided into 10 sections, all of which can be drawn separately. The full route starts at Kanchenjunga in the east and goes from there over Lumbasumba to Makalu Base Camp, on to the very high Sherpani Col, West Col and Amphu Laptsa and over the high Everest Tre Pas route to the Thame. From here it continues on to Tashi Laptsa and Rolwaling, to Bigu Gompa, towards Jugal and Helambu, via Panch Pokhari to the hard Tilman Pass and then the Langtang Valley. The route continues towards Somdang and Ganesh and from there the Manaslu trek starts over the Larkya pass Mashyangdi, before hitting the old time classic Annapurna Rundt and on to the eastern Dolpo and Pokhsumdo lake. From there it goes to the lower Dolpo towards jumla and to Lake Rara. The last section of the trek goes via the Humla traverse towards Simikot, through the Yari valley,

It is an adventure that only the strong, experienced trekker should consider trying their hand at. But for the few who venture out and get all the way through, adventures of the very greatest caliber on a journey that only quite a few people can boast of having experienced.