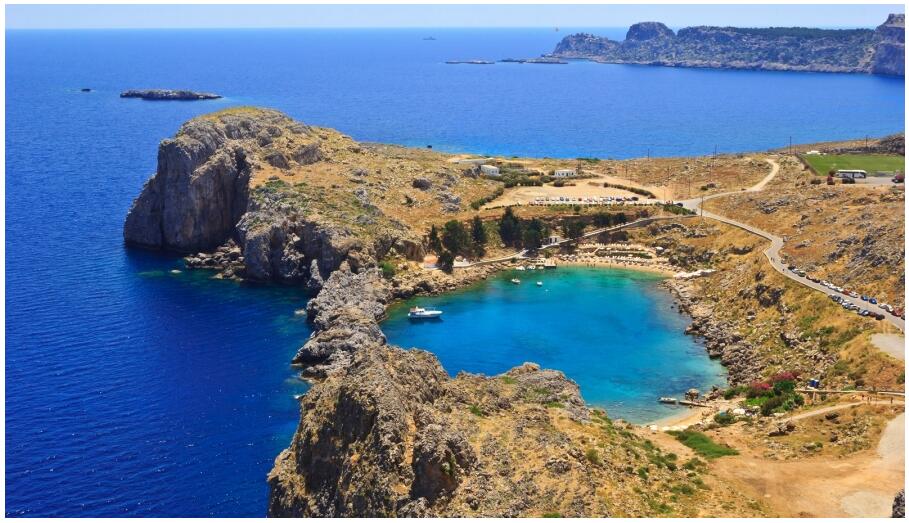 The Greek island of Rhodes belongs to the Dodecanese archipelago in the Aegean Sea and is one of the most popular tourist destinations in the eastern Mediterranean. The unique, picturesque island landscape with its fascinating beaches and the warm, sunny climate paired with the cordial openness of the local island population attract thousands of tourists from all over the world every year.

In the past, the magnificent sunny island was a coveted property for the most diverse rulers, who helped shape the eventful and multifaceted history of the island and whose traces can still be found today in the numerous imposing attractions.

In the following we present you the most exciting tours, the most beautiful attractions and the best sights in Rhodes. 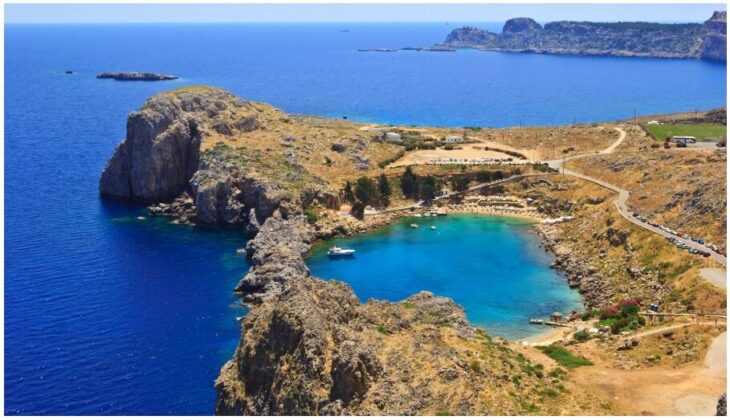 The absolute cultural highlight on Rhodes is the old town, which is a UNESCO World Heritage Site, with the imposing Grand Master’s Palace and the massive city walls surrounding it, which are over 4 kilometers long and in some places up to 12 meters wide. Even today there are numerous mosques in the enclosed old town, such as the Suleman-Pascha mosque and the Turkish library. The Grand Master’s Palace, built in the 14th century, sits enthroned on the highest level within the city and was considered the main residence of the Grand Master of the Joannites.

The historic building was later conquered by the Ottomans and restored and expanded by the Italians in 1922. Nowadays, visitors can not only see the impressive building, but also visit the Archaeological Museum of the Sun Island, which is housed in the building. The seahorse fountain in Platia Ippokratou square is a special meeting place for locals and tourists.

2. The Knights’ Road of Rhodes

A very special highlight is a walk along the Ritterstrasse in the old town, which leads to the Grand Master’s Palace. The Knights of St. John, who came mainly from France, lived in the simply furnished hostels that were built to the right and left of the paved street of the knights. Even today, visitors can marvel at the coat of arms of the order on the knight’s houses built in the late Gothic style.

There is an overwhelming medieval flair that is omnipresent on the entire Ritterstrasse. For this reason alone, the Knight’s Street is one of the most important sights in Rhodes and, next to the neighboring palace, it deserves its very own place in our recommendation list. Today the street is mainly used for consulates and upscale law firms.

About 70 km southwest of Rhodes town is the Venetian fortress Monolithos, which is one of the most fascinating sights on the island. The imposing structure, completed in 1480, was erected on the plateau of a 300 m high rock. The fortress with castle walls and cistern, which served as a protective castle against enemy attacks and pirates, towers over the village of the same name, Monolithos. From here the approximately 3 km long path leads to the Monolithos fortress.

The path can be comfortably covered both on foot and in an off-road vehicle and is climbed up the rock. The small chapel of St. Panteleimon is also located in the inner courtyard of the fortification. The ruins of the fortress, which was expanded by the Knights of St. John, are definitely worth exploring. After all, this place steeped in history offers a spectacular view of the beautiful coastal landscape and the small offshore islands.

The largest ostrich farm in Greece is located near the butterfly valley. Here, visitors of all ages have the opportunity to explore the wonderfully landscaped Nature Park Farma, to watch the animals while they are being cared for and fed, to have themselves photographed with them and to actively look after them. Cuddling, petting or feeding the little ostrich babies is definitely a highlight, especially for younger guests.

The area around Farma is a worthwhile excursion destination for families, especially when the weather is good. The large outdoor enclosure offers other exciting animals such as deer and roe deer, camels, ponies, donkeys or goats. The farm is also home to more than 100 ostriches. The children should perhaps not be told that the snack bar also offers fresh ostrich burgers.

The ancient city of Lindos is located on the south-eastern coast of the island and is one of the main attractions in Rhodes. Tourists flock to Lindos to admire the temple complex in what was once the most important city on the island, which has been fabulously reconstructed from the ruins of the Acropolis and the temple of Athina Lindia from the Hellenistic era.

Later the castle was appropriately remodeled by the Knights of the Order of St. John. The fortress is located on a 116 m high hill in the center of Lindos. The hill can be climbed on paths and footbridges specially made for visiting the Acropolis of Lindos. Alternatively, donkey guides offer their services for climbing Acropolis Hill. 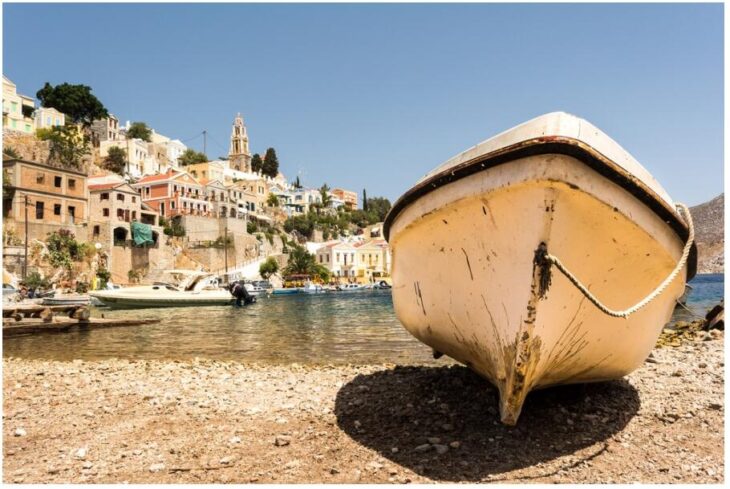 6. Valley of the Butterflies

In the north of the island there is the famous Petaloudes Valley of the Butterflies inland, in which a breathtaking number of butterflies can be observed, especially in the summer months. Attracted by the smell of the oriental sweetgum trees that thrive in the valley, butterfly species such as the bear moth find their perfect habitat in this nature-protected ecosystem for endemic flora and fauna.

Visitors are allowed to walk carefully and quietly through the valley on wooden walkways, steps and paths along the course of the stream in order to disturb the butterflies as little as possible. The exciting hike leads through well-wooded, shady terrain, past waterfalls and ends at the Kalopetra monastery.

The pilgrimage church Panagia Tsambika was built on the Tsambika hill and is part of a monastery complex that is currently uninhabited. The beautiful church can be reached via a gradually ascending, easily accessible path with wide steps. The panoramic view from the area of ​​the monastery over the sensational blue sea and the fantastic Tsambika beach is simply breathtaking!

Panagia Tsambika Church impresses with its beautiful icons, wall paintings, rich ornamentation and lavish decorations. At the foot of the Tsambika hill, one of the most beautiful beaches in the Aegean, the magical Tsambika Beach, stretches along the fine sandy 2.5 km long coastline, which is a true sun paradise with its crystal clear, turquoise sea water and the gently sloping golden sand beach.

The Valley of the Seven Sources – Epta Piges is an insider tip and is one of the most beautiful natural features that the diverse island landscape on Rhodes has to offer. The area of ​​the Seven Sources is located between the places Archipolis and Kolymbia, about 25 km southeast of Rhodes City and is a small natural paradise that is pleasant to walk through even in the summer months. Nature lovers can explore the refreshingly cool, wooded area on shady paths and footbridges and discover the seven springs.

They unite to form a small river and lead to a pond. The underground path through a 200 m long tunnel through which fresh spring water also flows is particularly exciting. The forest trails are easy to hike and allow many opportunities to admire the fabulous fauna and flora. A contemplative walk through this wild Rhodian forest beauty is an unforgettable, beautiful and special experience on Rhodes.

The water park in Faliraki near the northeast coast of the island is definitely one of the highlights among the sights on Rhodes and is an absolute must for young people and families with children during their visit to the island. The water park is one of the largest of its kind in Europe and has great themed areas that will make every child’s heart beat faster.

Whether with exciting speed and rafting slides, relaxing wave pools, aquagym pools, a great toddler pool or the obligatory lazy river, water sports enthusiasts of all ages can have a lot of fun here with fantastic experiences and lots of fun. The water park has numerous restaurants and cafes and organizes a free transfer by bus or boat from Rhodes Town.

About nine kilometers from Rhodes town are the former medicinal healing springs in the thermal baths of Kallithea. Here on the east coast of the island, however, the natural springs dried up a long time ago. In 1920 an imposing thermal bath was built and, after extensive renovation projects, has been a popular tourist highlight since 2007.

Especially the gleaming white domed roof, the stylish, round arcades and colonnades, the fabulously designed rotunda in the inner atrium with fountain and the impressive variety of plants fascinate visitors who combine the admirable excursion destination with a visit to the beach at the picturesque bathing bay directly in front of the Kallithea springs can. 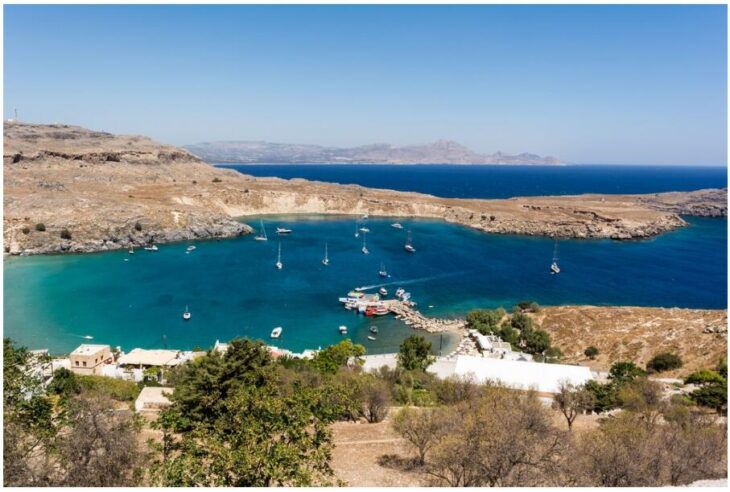