Several events of significance to the situation occurred in 2008: Kosovo declared independence from Serbia and was recognized by, among others, the United States and most of the EU. A few months later, Russia recognized both Abkhazia and South Ossetia as independent states, separate from Georgia. In all cases, these were clearly defined and in practice autonomous territories dominated by ethnic groups that wanted to break away from a country with a different majority of the population.

In October 2009, Armenia and Turkey signed what was described as a historic agreement to establish diplomatic relations and open borders between the two countries. Turkey had closed the border in 1993 in solidarity with Azerbaijan, in connection with the war over Nagorno-Karabakh. But after six months, it became clear that the agreement had come to nothing. Armenian President Serzh Sargsyan halted the ratification process on the grounds that Turkey wanted to link the deal to a solution to the Nagorno-Karabakh issue.

New fatal clashes occurred in 2010. In October, the parties agreed to exchange prisoners of war and remnants of those killed in the fighting.

The concessions have been few among the parties involved, and strong nationalist feelings in both countries make it difficult to reach compromises. Politicians also like to play on nationalism for domestic political reasons, not least in authoritarian Azerbaijan. The presidents and foreign ministers of the two countries met in 2013 and talked about negotiating initiatives, but nothing happened.

Nagorno-Karabakh continues to demand independence and accuses the outside world, not least the Western world, of sticking to double standards. People like to point to Kosovo. But no country has recognized Nagorno-Karabakh, not even Armenia, which is closely linked politically, economically and militarily. Armenia wants to avoid clashing with Russia, and has perhaps seen the demand for independence mostly as a strategic step towards a union with Nagorno-Karabakh. A proposal in the Armenian parliament in 2013 to recognize Nagorno-Karabakh was voted down by a large majority.

Armenia continued to occupy not only Nagorno-Karabakh but also most of the seven surrounding districts of Azerbaijan, a total of close to 14 percent of the country’s territory. The border area is mined and minor skirmishes are common. More than half a million people are estimated to be living in refugee camps in Azerbaijan, more or less in social misery. There are a couple of hundred thousand refugees in Armenia. In Nagorno-Karabakh, the population survives largely thanks to transfers from Armenia and from numerous exiled Armenians around the world. The area’s own opportunities for economic development are limited. When the airport in Stepanakert was refurbished and reopened in 2012, Azerbaijan threatened to shoot down planes, so traffic did not start.

Mobility in the region is limited due to closed borders. Trade is cut short, which worsens the outlook for economic development throughout the region. At the same time, Azerbaijan’s economy has seen a real boost through oil and gas revenues. Huge investments have been made in the military and the government in Baku has occasionally rattled with weapons and talked about the recapture of Nagorno-Karabakh. Armenia has the support of Russia, but the military agreement between Yerevan and Moscow does not cover Russian aid to retain Nagorno-Karabakh.

Nagorno-Karabakh is often described as one of several frozen conflicts that have existed since the collapse of the Soviet Union. No solution seems to be in sight within the foreseeable future. At the same time, there is a risk that it will “heat up” as it did in 2008 in the case of South Ossetia, another of the frozen conflicts in the South Caucasus. Russia and Georgia then ended up in a short-lived war. As in the case of South Ossetia, the conflict in Nagorno-Karabakh is largely forgotten by the outside world, with the exception of the immediate area.

Nagorno-Karabakh is located in a strategically very important area. There are large oil and gas pipelines in the region, which means that the unrest could disrupt deliveries to Europe. In addition to Russia, both Turkey and Iran are nearby.

The risk of new wars worries the outside world. In 2014, some 20 people were killed in fighting along the border with Azerbaijan and a military helicopter from Nagorno-Karabakh was shot down by the Azerbaijani army. The presidents of Armenia and Azerbaijan met, but the meetings only resulted in promises of dialogue. 2015 required human life battles every week. It was also warned of arms race since both Azerbaijan and Armenia bought Russian weapons for large sums.

In April 2016, the fiercest fighting broke out since the war that ended in 1994. At least 100 people were killed despite the ceasefire agreement being reached after four days of fighting. The deteriorating situation prompted the presidents of Armenia and Azerbaijan to jointly promise to ensure that the new ceasefire was respected. They also agreed that more observers were needed than just six unarmed OSCE representatives.

Occasional cross-border shelling has continued, however, and in 2020 wars broke out that claimed almost 5,500 lives in total, according to official data from both sides. It also gave examples of how great powers, not least Turkey, are pulling the strings to influence the course of events. Turkey supported Azerbaijan and anti-Armenian demonstrations took place in Turkish cities. In November, the war ended after the city of Şuşa and some other areas were taken by Azerbaijan, which reclaimed part of the land held by Armenians since the 1990s. A ceasefire agreement reached with Russian mediation confirmed the Armenian losses. Ethnic Armenians are thus forced to leave areas they have been encouraged to move into since the 1990s war. 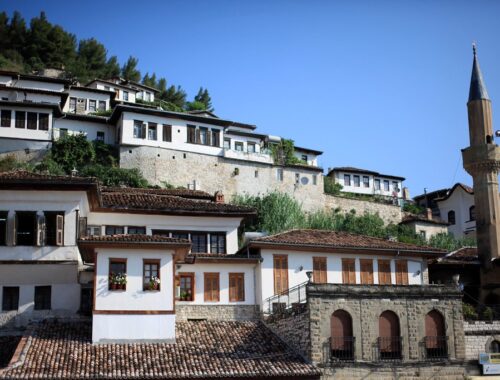